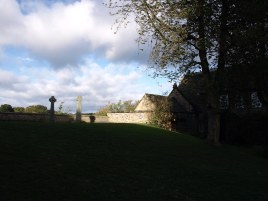 Have you noticed that for many authors and composers, one work in quite different

from all the others? To back up my thesis, I give you Shakespeare’s Tempest and Gilbert & Sullivan’s Yeoman of the Guard. The Bible too has that rather strange book of the Revelation. Also, in any anthology or collection, such items are often put at the end.

Well, today we come to the very last Psalm. Does it then show some unique feature or other? Well, on the face it, it is but another hymn to celebration and thanks-giving. However, with a bit of thought, it dawns on us that it doesn’t actually give a personal reason for this upwelling of joy. And so, in that way, at least, it is unusual. Since most of the other Psalms do express gratitude for some specific divine gift or direct response. But this is not true for Psalm 150. It is very much a matter of ‘praising – Yes’ but ‘motives – No’.

Why should this be?

Well there is almost a suggestion in its lines that praise is its own reward. That praise is the obvious response to being given joy but that it also the way to find joy itself. In fact, the giving of praise in faith strengthens faith and emboldens belief. Praise then is more a question than an answer.

Something of this can heard in the life of John Wesley. We of course know him to be the cofounder of the Methodist Church with his younger brother Charles Wesley. Yet to achieve such a monument to faith, he had many failures. But throughout he kept enough faith to keep looking for faith. Indeed, this may have started when he was on his way to the Americas and his ship lost a mast placing it in jeopardy. Whilst most of the passengers panicked a group of Moravian Christians calmly sang hymns and psalms.  This faith searching for faith and praise search for the reason for praise impressed him hugely.

Many years later it was at one of their service, which he attended in a state of low depression, that he found his joy. Since as he relates:

“In the evening, I went very unwillingly to a Moravian society in Aldersgate Street, where one was reading Luther’s Preface to the Epistle to the Romans. About a quarter before nine, while he was describing the change which God works in the heart through faith in Christ, I felt my heart strangely warmed. I felt I did trust in Christ, Christ alone for salvation. “

That phrase ‘strangely warmed’ is one of the turning points in British Church history. It could be our turning point too.

But all that flies in the face of the Psalm that is the epilogue but not the epitaph to the Psalter. For its truth above all truths is that God is our creator. That through Christ, he is our saviour. And that, through the Spirit, those in the deepest mire will find their hearts strangely warmed.

One hymn that I rarely slate to be sung is ‘Oh love that wilt let me go!’ The reason being that one well-known member of our Church family found it too much of an emotional trial.

It may well be so for you too. But its story tells of joy in the least expected place and faith found through faith.

For its composer, the Reverend George Matheson, was very bright academically. In fact, he graduated with first class honours when he was only 19 years old from Glasgow University.  Yet a deep tragedy was being worked out in his life. For, even as he completed his studies, he was rapidly going blind. He broke the news of his impending blindness to his fiancé.

To his astonishment and deep sadness her blunt answer came as a dagger to his heart, “I do not want to be the wife of a blind man” she said – and with that they parted.

Years later the memory of that rebuff came flooding back on the evening of his sister’s wedding who had been his assistant and companion. He recalls the pain of that night as he tells how it was that he penned his most famous hymn:

“My hymn was composed in the manse of Innellan on the evening of the 6th of June, 1882, when I was 40 years of age. I was alone in the manse at that time. It was the night of my sister’s marriage, and the rest of the family were staying overnight in Glasgow. Something happened to me, which was known only to myself, and which caused me the most severe mental suffering.

The hymn was the fruit of that suffering. It was the quickest bit of work I ever did in my life. I had the impression of having it dictated to me by some inward voice rather than of working it out myself. I am quite sure that the whole work was completed in five minutes, and equally sure that it never received at my hands any retouching or correction.

I have no natural gift of rhythm. All the other verses I have ever written are manufactured articles; this came like a dayspring from on high”.

Here then is surely a most certain case of praise seeking a reason for praise, of a little faith searching a greater one and a rediscovery of joy in the one whose love in Matheson’s own words – wilt not let us go.

This Sunday then of high summer, let us give ourselves over to praise and faith and to joy. If, for you, they are in short supply may they then grow in our seasons’ warmth. If your heart however finds itself strangely warmed, let it rejoice wholeheartedly, let it luxuriate in renewing faith and let it praise God not for you can get but for whom you can give.

For at the end of his life of faith finding faith, John Wesley passed away repeating “The best of all is, God is with us”

So now as we close our Psalm book refreshed from its opening let us join him and George Matheson in giving praise in those very same words: